There are many ways to track the rise of vaping in the U.S. You can look at how many vape shops have opened across the country. The number tripled from 3,500 in 2014 to 10,591 in 2016, according to Yelp. Or you can look at sales figures. The electronic cigarette industry grew from $1.7 billion in 2014 to $4.1 billion last year, according to Wells Fargo.

While impressive, these statistics don’t reveal much about the people – many of them former smokers – who have fueled this astonishing growth and who are most at risk if proposed federal regulations crush the industry. They also don’t offer any insight into how and when vaping evolved from subculture to mainstream. The rise of vaping has been a grassroots movement, driven not by big tobacco companies but rather by individuals and small businesses.

To understand how vaping caught on across the country, we turned to the ultimate grassroots medium: Twitter. Of course, there is a difference between vaping and tweeting about vaping, and not all American adults use Twitter. However, Twitter is unique among social media platforms in that it has a nearly equal number of male and female users, as well as urban, suburban, and rural users. In this age of social media, surges of tweets can reveal important changes in our collective attitudes and preferences.

Among the millions of tweets that Americans shared between January 2015 and March 2017, there were about 55,000 that made reference to vaping. Read on to find out what we learned when we mapped and analyzed these vape-related tweets.

Tweet Tracker:
How Vaping Went from Subculture to Mainstream.

As the largest cities in the United States, it’s probably not surprising that New York and Los Angeles were the first and second places where large numbers of people posted vape-related tweets during the time period we studied. But from there, the data departs from the expected path. Ashland, OR (population 20,684) was the third city to surge, based on our scoring formula, which used a combination of total vape-related tweets (65%), unique users posting vape-related tweets per 100,000 residents (25%), and average mentions per user (10%) to rank cities.

Aside from New York, the West Coast was where the highest concentration of vaping-related tweets emanated in early 2015 with San Francisco and Seattle appearing next on the list. But Springfield, VA (population 30,484) was another surprise entry in the rankings, as the sixth city to surge. From there, the number of tweets emanating from Miami Beach and Houston ballooned.

Mapping posts over a period of more than two years, it becomes clear that after New York City, enthusiasm for vaping (as measured by tweets) generally built from the West Coast to the South, back to the Northeast, and then inward, to the Heartland in 2016.

Not all people who vape use Twitter, and not all vapers who use Twitter share public posts about it. But social media does provide some fascinating insights into people who are passionate about vaping, mods, e-juices, vaping tricks, and more. For the next part of our study, we ranked states and cities based on how many unique users per 100,000 population posted vape-related tweets between January 2015 and March 2017.

Which States Are Most Enthusiastic About Vaping, Based on Tweets? 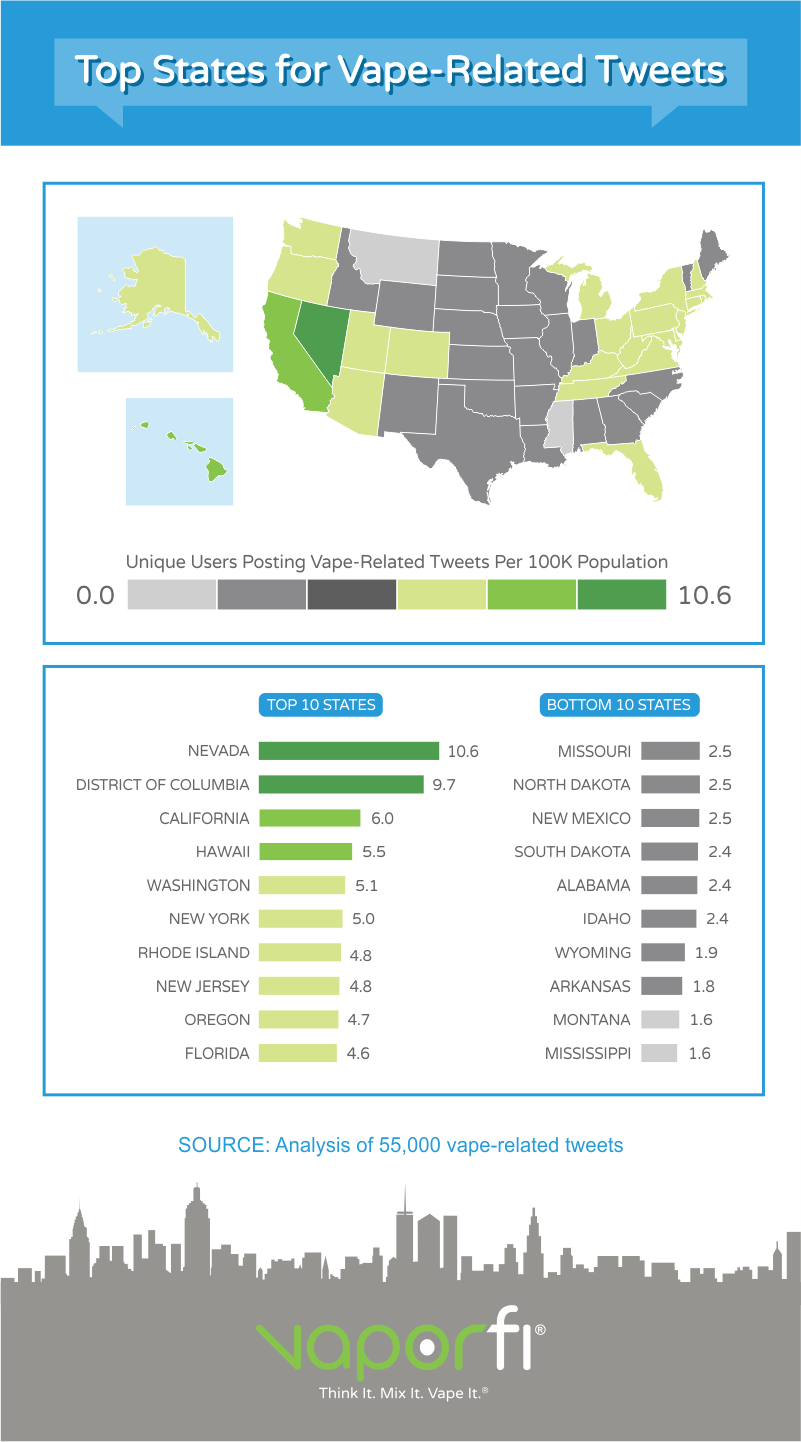 Nevada is, by far, the state with the most people posting vape-related tweets. It is also one of the states with the fewest laws related to e-cigarette use (the legislature specifically exempted e-cigs from taxation and regulation in 2015) and the most vape shops per capita – 186 shops for just under 3 million residents, according to Yelp. The District of Columbia, although not a state, was noteworthy for its high number of people tweeting about vaping, even though it doesn’t have a particularly high concentration of vape shops. California came third, which is particularly impressive given that it has some of the nation’s most restrictive vaping laws and we controlled for its extraordinarily high population.

At the other end of the spectrum, Mississippi and Montana had the lowest rates of people tweeting about vaping. That might be partly because there are fewer Twitter users in general in those states. But other indicators also support a lower enthusiasm for vaping. There are 32 vape shops in Mississippi for about 3 million residents, and only 7 vape shops in Montana for about 1 million people, according to Yelp. That puts both states in the bottom 10 percent nationwide in terms of vape shops per capita.

Which Cities Are Most Enthusiastic About Vaping, Based on Tweets?

When it comes to enthusiasm for vaping, no city can touch Winchester, NV, a suburb of Las Vegas. That might be, in part, because Las Vegas was the site of the Vape Summit trade show in 2015. However, the number of unique users posting vape-related tweets from Winchester (population 27,987) was consistently high during the entire period of the study, not just during the convention. Miami Beach, FL, and West Hollywood, CA came in second and third in terms of number of unique users posting vape-related tweets per 100,000 residents. Overall, California cities took 12 of the top 25 spots on our list of top cities. Nevada and Florida each had three cities on the list.

At the other end of the spectrum, Mississippi and Montana had the lowest rates of people tweeting about vaping. That might be partly because there are fewer Twitter users in general in those states. But other indicators also support a lower enthusiasm for vaping. There are 32 vape shops in Mississippi for about 3 million residents, and only 7 vape shops in Montana for about 1 million people, according to Yelp. That puts both states in the bottom 10 percent nationwide in terms of vape shops per capita. 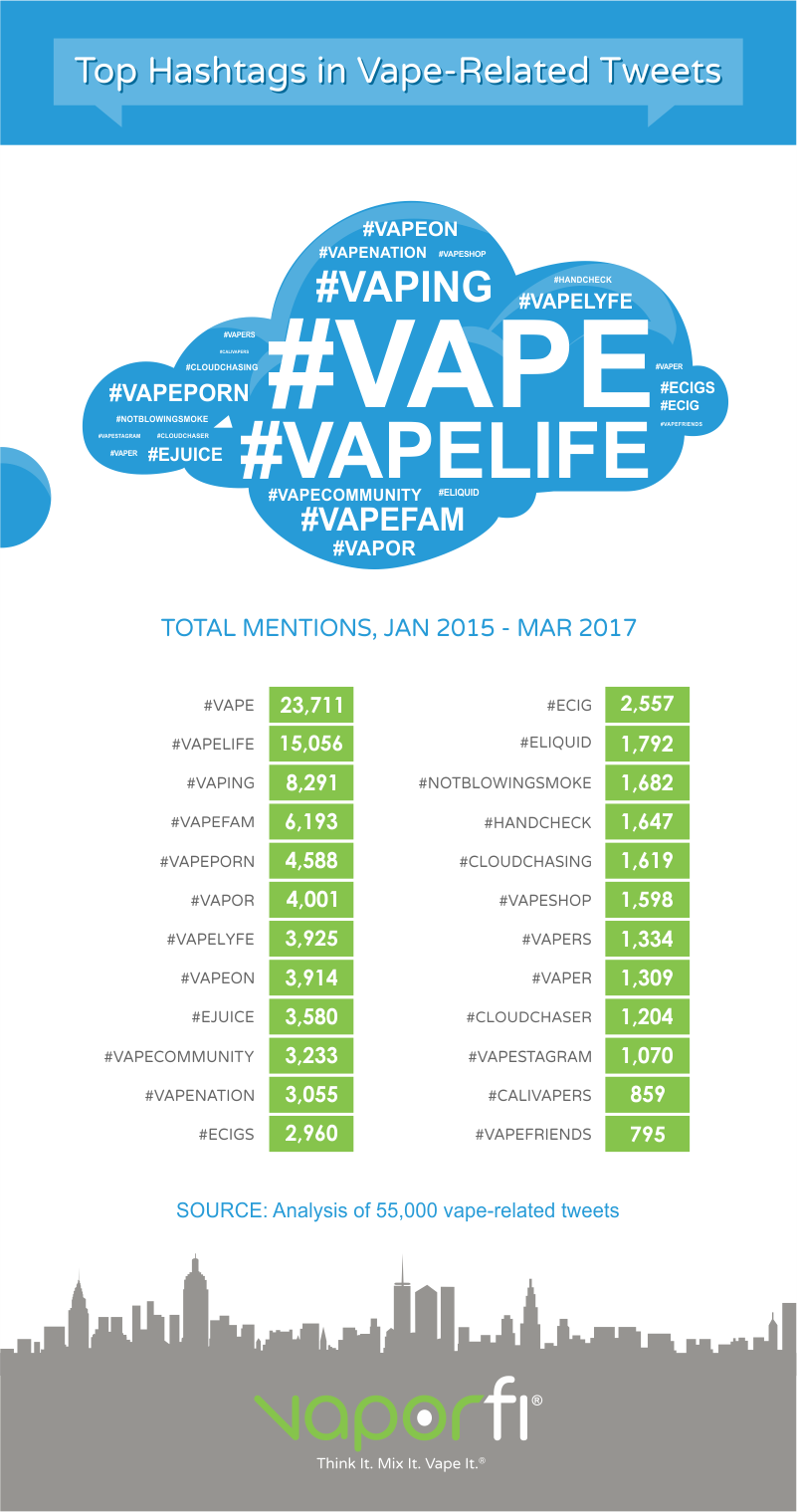 The top hashtag for vape-related tweets was #vape, followed by #vapelife and #vaping. Based on the tweets we analyzed, people were most likely to post when they were enjoying their first vape of the morning, taking a vape break with friends, trying a new e-juice, visiting a vape shop, using a new mod or device, or doing tricks with clouds of vapor. Some tweets were from retailers announcing new inventory or sales. There were also many tweets that expressed concern about possible regulations that could damage the industry. Of the tweets we reviewed, 25,534 (46.4%) were cross-posted with Instagram.

A few sample tweets from our study:

Who Vapes More: Men or Women? 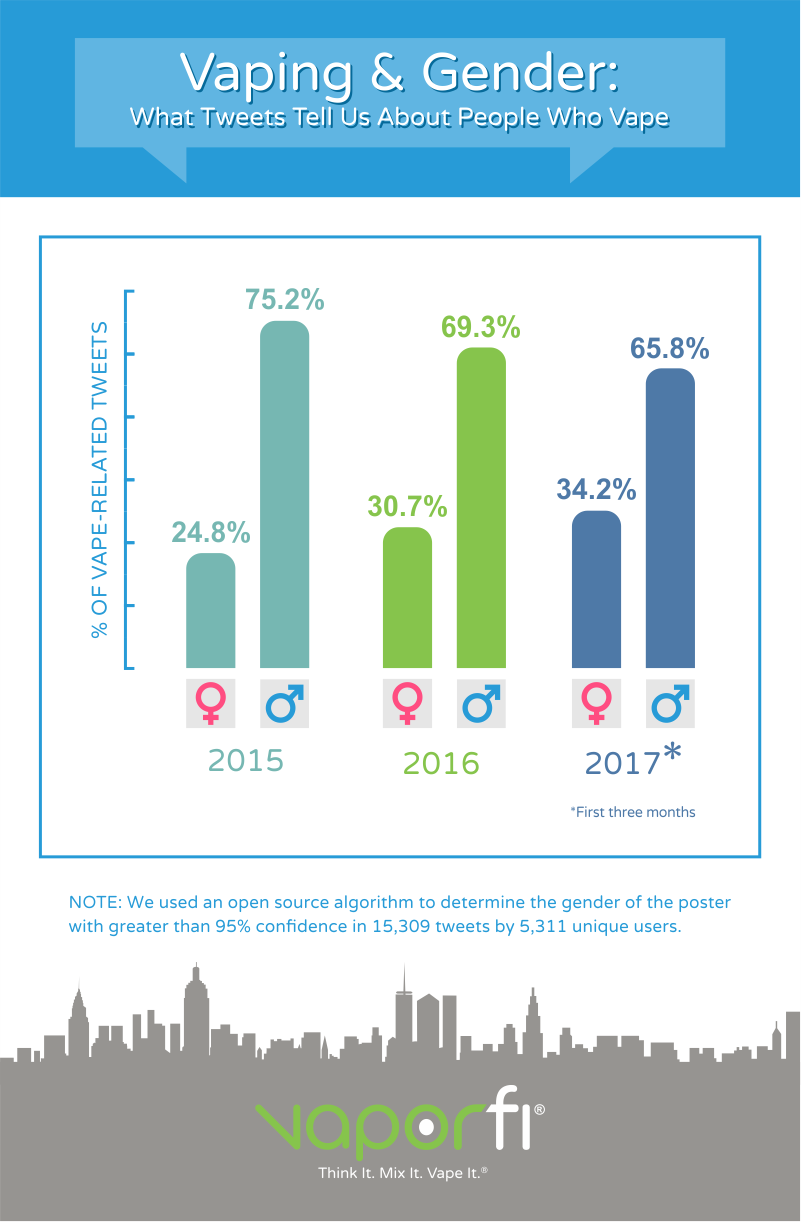 Women tend to share fewer vaping-related tweets than men, but the gap has narrowed over the past few years. The percentage of tweets from female-owned Twitter accounts has risen from 24.8% in 2015, to 30.7% in 2016, and 34.2% in the first quarter of 2017. The raw figures would suggest that only a third of people who vape are female. However, research released by the CDC in 2015 found that 4.1% of men and 3.4% of women used e-cigarettes daily. If that’s the case, then the change reflected in the tweets is that women are becoming more public about their use of vaping products, sharing pictures and comments more readily on social media.

The Geography of Vaping 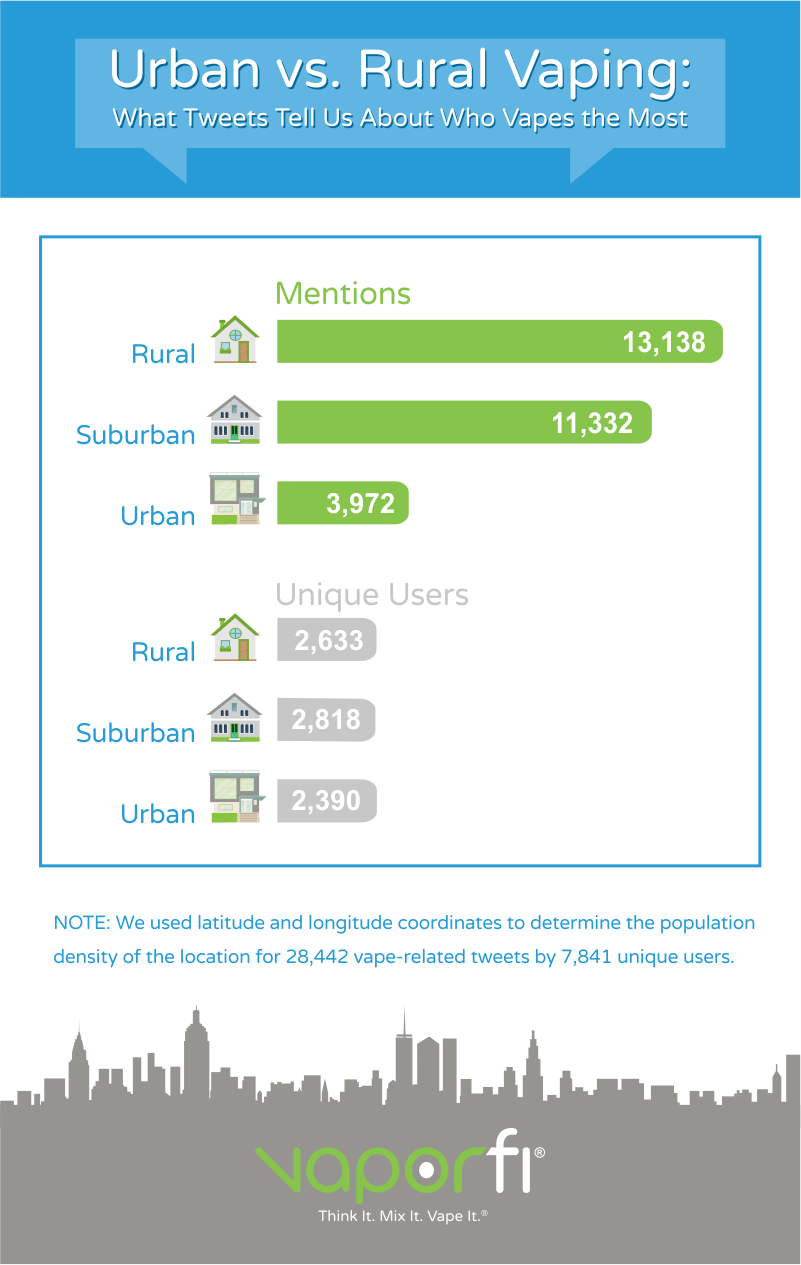 We were curious about whether vaping is primarily an urban cultural phenomenon, so we looked at the latitude and longitude of 28,442 geo-tagged tweets and sorted them by population density. The number of Twitter users posting vape-related tweets was similar in rural, suburban, and urban areas. However, rural users posted three times as often as urban users. The average number of vape-related tweets per person was 4.99 for rural users, 4.02 for suburban users, and 1.66 for urban users.

The democratic nature of vaping culture

It’s human nature to want to categorize and stereotype people, but our study found that while vaping might have started as a subculture in big cities on the coasts, it is now a mainstream phenomenon that crosses many geographic and demographic boundaries. Vaping is increasingly a part of people’s lives that they share on social media. If new federal regulations force vape shops to close, it will affect not only small business owners from coast to coast, but tens of thousands of people who are passionate about vaping.

We reviewed millions of Twitter posts from January 2015 through March 2017 and found 54,993 geo-tagged tweets that included keywords related to vaping. For our “mapping the trend” analysis, we created a weighted scoring formula that considered total vape-related tweets (65%), number of unique users posting vape-related tweets per 100,000 residents (25%), and average mentions per user (10%) to rank cities. We analyzed each quarter of 2015 and 2016, and the first quarter of 2017 separately to create a rough timeline of when vaping-related tweets surged in different parts of the country. For our “top states” and “top cities” analysis, we controlled for broad differences in population across the country by using U.S. Census figures to calculate unique users posting vape-related tweets per 100,000 residents.

You may reproduce any of the graphics above freely for noncommercial purposes. We just ask that you please attribute VaporFi fairly in your coverage and provide a link to this page, so your audience can learn more about our study and its methodology.