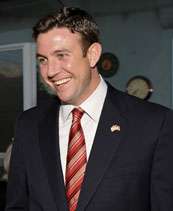 Despite the consistent flow of misinformation, sensationalized accounts of electronic cigarettes, and all varieties of stories surrounding the vapor industry, people continue to find that their needs are being met with these products. Contrary to what these crazy media reports may want the public to believe, vapers are a population of rational thinkers, who have chosen a method to counter their cigarette habits with. And millions have succeeded.

Even still, political support has been less than steadfast, as, all too often, special interest groups lobby hard in favor of denying the most effective alternative that has come along to challenge traditional smoking. Many politicians have chosen to keep on the sidelines, some have been adamantly against the movement, however, we are beginning to gain traction and support from individuals who understand the important role vapor can play in the future and in terms of public health.

In an article posted just yesterday by Electronic Cigarette Consumer Reviews (ECCR), has not only found an advocate in favor of vaping, but a politician on Capitol Hill who vapes himself. His name is Duncan Hunter, a Republican member of the House who represents the 50th Congressional District of California who also sits on the Armed Forces; Education; Workforce & Transportation committees. Without a doubt, the man has clout combined with respect, and has launched a campaign offensive in favor of electronic alternatives to tobacco, also known as e-cigarettes.

His recent stance, documented in a letter written to House Minority Leader Nancy Pelosi was published December 9th in The Hill emphasizes the need for fair regulating in regards to vapor products, based on the fact that their potential is promising. His aim was to counter the effort of the Food and Drug Administration, which is pushing to effectively eliminate the entire industry by retroactively dating the approval of electronic cigarettes, even though they’ve been sold for almost a decade, back to February 15, 2007. This would effectively erase any prior existence of today’s vapor products, which have experienced massive performance and design advancements from the infancy stages and limited offerings prior, to the mind-blowing innovations of today.

In fact, according to Rep. Hunter, discussions concerning this are already underway to modify specific language within the proposed legislation, specifically to change the date in question to one that is reasonable in regards to the e-cigarette products now in existence; many of the products being used today did not even exist in 2007.

Of course, with the ongoing debate surrounding this faulty excuse for bringing about the potential demise of hundreds of businesses and thousands of jobs rightfully in existence today, we must commend the bold common sense Rep. Duncan Hunter is demonstrating, as well as his efforts to end such prohibition before it becomes a law of erroneous proportions.

How To: Store Your Juice

Survey Says Millennials Are Leading the Way in E-Cig Popularity

VaporFi MMA at Bellator 201 is Going Down Tonight: Don’t Miss it!